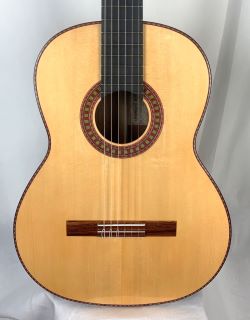 The Wolfgang Jellinghaus Flamenca Negra 1A has a German spruce top, Madagascar Rosewood Back and Sides, a very comfortable neck profile.
The Flamenco Negra 1A is a very light instrument, powerful tone, extremely balanced, easy to play with excellent tone, long sustain, great projection, and low action.  The handwork on this guitar is superb. The Guitar Includes a Humicase, 1 set of strings, a guitar cloth, and an Ultimate Guitar Protector.

Luthier comments’ Domingo Esteso was one of the first guitar builders who concentrated on design, especially for Flamenco music. A light overall guitar, together with narrower sides and the use of the Mediterranean Cypress for backs and sides leads to a quick, bright, and percussive sound. More attack, a boost of the middle frequencies, and a little less sustain are the basic sound goals for Flamenco Style. The demand for a Concert Flamenco guitar made guitar builders provide a longer sustain, and a  stronger, harder bottom, like Indian Rosewood and in the best cases Madagascar or Brazilian  Rosewood.

Luthier Wolfgang Jellinghaus who was born in 1951 in Dortmund, Germany. His father, Walter Jellinghaus, was himself a guitar maker and naturally introduced the craft to Wolfgang at a young age. In 1978, Wolfgang opened a retail music shop called Musik Jellinghaus GmbH and in 1983, he became involved in manufacturing and so created Martinez Guitars in China, designing their first line of guitars. In 2013 he set up a small boutique, a traditional workshop that specialized in making high-quality guitars in the style of such great historical makers as Lacote, Torres, Hauser, and Ramirez, among others. Wolfgang’s Guitars are very unique, and maybe some of the best-made guitars in today’s market. Once you play one, you’ll understand. 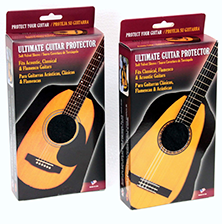 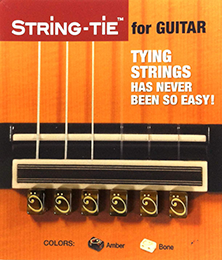