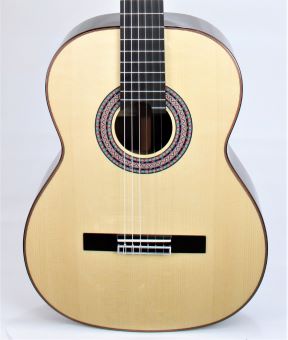 The Milestones Anna SP Recital line comes with a German Spruce top, East Indian Rosewood Back and Sides, Ebony Fingerboard, and a very comfortable neck profile. This is a fantastic, mature guitar suggested to advanced and professional guitar players. Like most Wolfgang Jellinghaus guitars, the Milestones Anna SP is a full sound, powerful tone, well balanced, with full Longest sustain,  and great projection. The action is  3.5mm on the 6th string 12th fret and 3 on the 1st string 12th fret. Soft and easy to play. The colorful rosette brings life to the light Spruce top.

Luthier Wolfgang Jellinghaus was born in 1951 in Dortmund, Germany. His father, Walter Jellinghaus, was himself a guitar maker and naturally introduced the craft to Wolfgang at a young age. In 1978, Wolfgang opened a retail music shop called Musik Jellinghaus GmbH and in 1983, he became involved in manufacturing and so created Martinez Guitars in China designing their first line of guitars. In 2013 he set up a small boutique, a traditional workshop that specialized in making high-quality guitars in the style of such great historical makers as Lacote, Torres, Hauser, and Ramirez, among others. Wolfgang’s Guitars are very unique, and maybe some of the best-made guitars in today’s market. Once you try one you’ll understand.