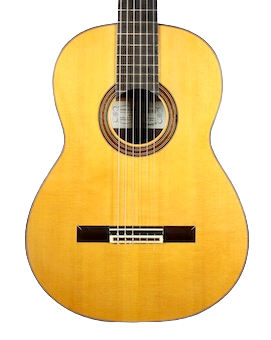 This is an excellent Alejandro 1987 Classical India. A great  Spanish guitar in pristine condition. This guitar has been played regularly for many years and therefore has a lovely open top, and loose-rich sound. The sound is bright, has strong volume, is well balanced, and modulates easily between sweet and lyrical. Playability is easy with a comfortably C-shaped,  flatter neck than Jose Ramirez Guitars, medium action, and the 20th fret for players needing a high natural C. Fitted with Fustero original tuners and a hardshell case, this is a superb Spanish guitar to add to your collection.

Alex van der Horst, aka Alejandro (1959-2009) was a well-respected Dutch guitar luthier, who built guitars in Malaga, Spain. While not very well known here in the US, Alejandro was one of the most promising European luthiers of this era. According to Otto Vowinkel ( https://ottovowinkel.com/), with whom he worked on a regular basis,…”Alex’s ideal guitar is one that has a flexible tone, great projection, and quick response. His guitars are very well built, and offer the player endless tonal possibilities”.

Due to his illness, he stopped building in 2008. Sadly, Alex passed away in September 2009.

I personally met Alex in Sweden in 1986, while attending Ingesund College of Music. He came to show guitars to our Professors, at the time Gunnar Lif and Ove Walter, After playing for a few minutes, I knew right away I wanted one. He delivered the Alejandro Classical India one year later in 1987. …………… A few years later, while I was living in Stockholm, Alex contacted me and asked if he could borrow my guitar???!! He claimed he did something different when he built my guitar, which made it sound better…., but he could not remember what it was.????!…  Go wonder. Alex had my guitar for 9 days and 5 hours. When he brought it back, Alex thanked me dearly, we had a nice bottle of red wine ( his favorite) and talked for hours in my one-bedroom apt/studio. He never told me what he did differently on my guitar, but we had a great time…

Alex LOVED to drink red wine, and talk about music and guitars for hours…..He used to say,” the Classical and Flamenco guitar has NO amplification, I need to build a guitar that projects in ANY room, and still maintains the balance, sweetness, and warmth”.  Although Alex was not a concertmaster, but his interpretations reflected his warm and charismatic persona.  When you would start playing Alex would scream,… “play louder, louder, I want to hear the guitar”…

With his crazy dark curly hair going in every direction, a heavy Dutch accent, loud laughter, and his very unique- extravagant personality…Alex was a real innovator of his Era.