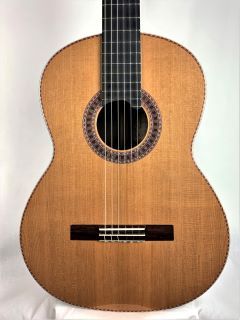 The Wolfgang Jellinghaus Espanola 1A has a Red Western Cedar top, Madagascar Rosewood Back and Sides, Spanish Cypress sides ( inside ), ebony fingerboard, cedar neck, and a very comfortable neck profile. Each note played come out with no effort thanks to a perfect set up and French-Polish finish. Dedicated to honoring the work of luthier Jose Ramirez, the Wolfgang Jellinghaus Espanola 1A has a very powerful tone, extremely balanced, lightweight instrument, easy to play with excellent tone and projection. Just as his great-uncle Manuel Ramirez, and his grandfather Jose Ramirez which assembled and trained the luthiers that defined the Madrid school between the 1960s to the 1990s, The Espanola 1A is a fantastic concert guitar.  Suggested for advanced and professional players. The guitar includes a Humicase, 1 set of strings, a guitar cloth, and a guitar cover/protector.

Wolfgang Jellinghaus who was born in 1951 in Dortmund, Germany. His father, Walter Jellinghaus, was himself a guitar maker and naturally introduced the craft to Wolfgang at a young age. In 1978, Wolfgang opened a retail music shop called Musik Jellinghaus GmbH and in 1983, he became involved in manufacturing and so created Martinez Guitars, designing their first line of guitars. In 2013 he set up a small boutique, a traditional  Artisan workshop that specialized in making high-quality guitars in the style of such great historical makers as Lacote, Torres, Hauser, and Ramirez, among others. Wolfgang’s Guitars are played by some of the most renowned names worldwide.